You are here: Home / General / HOW (AND WHY) SQUARE WATERMELONS ARE MADE 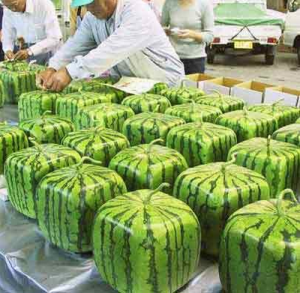 Let’s get one thing out of the way right up front: It doesn’t matter what shape the watermelon is, it’s what’s inside that matters. That said, you have to admit there’s something cool about watermelons that defy convention by assuming different shapes.

Last month, I talked about Japanese farmers who had figured out a way to grow heart-shaped watermelons. Of course, the precursor to those sweethearts are the unusual square watermelons that got their start in Japan almost a decade ago. But how are they grown, and why bother tampering with Mother Nature? Both are good questions. I’m glad I asked them.

First, the how. It’s actually pretty easy (relatively speaking) to grow a square watermelon. Just about anyone can do it. While the watermelon is still small on the vine, a square, tempered glass box is placed around it. When the watermelon gets bigger, it assumes the shape of the box! You can do this too. There are even websites dedicated to teaching you how. Just remember to use a glass or transparent mold so the sunlight can reach the watermelon on all sides (except the bottom, I guess).

But, just like the heart-shaped creations, square watermelons cost a bit more than one shaped by Mother Nature. It’s a small price to pay for the ability to store it in your fridge, although I guess you could just cut up a normal watermelon and make it fit. Oh well… the square ones still look pretty darn cool.