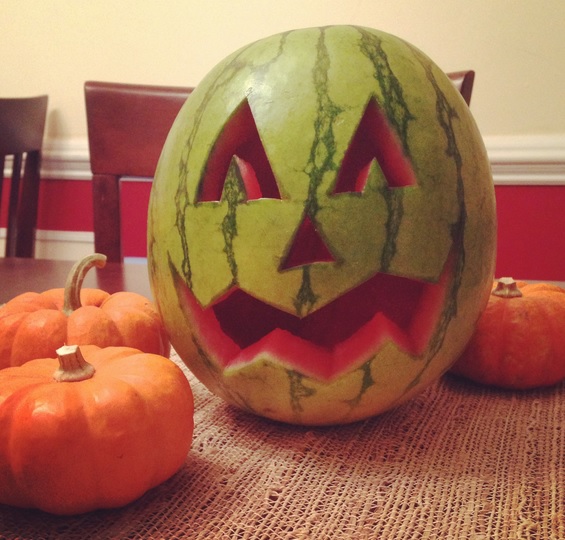 Yes, Halloween isn’t until tomorrow, but I’m posting this today because I’m not really sure when most people read these blog entries. (I could post it tomorrow, but you might read it on November 1, and there’s nothing worse than expired holiday greetings.)

Continuing a tradition I started a few years ago, I carved the “jack-o-melon” above and set it on my doorstep. He looked a bit alone, so I surrounded him with a few mini pumpkins to complete the display. (He looks a little frightened by the pumpkins, doesn’t he? Sort of like they’re ganging up on him like a hoard of mini-pumpkin zombies.)

After I carved my not-so-scary watermelon, I jumped online to learn more about Halloween. Here are a few of the more interesting facts I discovered:

1. Pumpkins have long been the standard when it comes to Halloween carvings, but it wasn’t always that way. Turnips, potatoes and beets were the original Jack-O-Lanterns, but immigrants from Europe used pumpkins when they arrived in the U.S. because they were larger and more readily available. (Can you imagine a carved beet?!)

2. Halloween is the second highest-grossing holiday of the year, behind Christmas.

3. More than 35 million Halloween greeting cards are given each year. (Yet I’ve never given nor received a Halloween card in my entire life!)

5. The origins of trick-or-treating dates back 2,000 years when Celtic villagers disguised themselves in costumes made of animal skins to drive away phantom visitors. Tables of food were often left out to sooth unwelcome spirits. In the Middle Ages, people began dressing as ghosts, demons and other creatures, performing antics in exchange for food and drink.