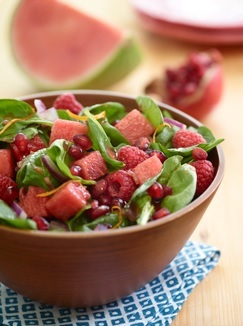 According to the National Watermelon Promotion Board website, this salad is also known as the “Red Eye Special” because it’s rich in lutein and zeaxanthin, two compounds shown to protect eyes from vision loss. It also supplies more than half your daily need for the B vitamin, folate, the entire day’s need for vitamin A, along with hefty doses of vitamin C, iron, magnesium, calcium, and antioxidants.

To be honest, I’ve never actually eaten a pomegranate, but I’ve had pomegranate juice, so I know it’s delicious. After taking a look at this recipe, however, I might have to pick up a pomegranate or two during this week’s grocery trip. Before then, I’ll have to do some research to figure out what they look like.

Place juice in a small saucepan over medium-high heat and simmer until reduced to about 3 tablespoons and liquid is a thick syrup. Set aside. When cool, add remaining dressing ingredients, from vinegar to salt and pepper. Whip. Set aside for flavors to blend.