You are here: Home / General / Watermelon – A Snack Fit for our Grizzly Bear Friends

Us humans are not the only watermelon lovers in the world. Did you know that bears love watermelon too?

Watermelons hold moisture making them a popular choice for a range of animals that have fallen water poor in drought conditions. We don’t blame our furry friends for wanting a taste of our juicy, pink fleshed melons although if you are close to the habitat of natural animals you might want to protect your watermelons if you intend on eating them whole. Watermelons are a popular treat given to a number of different animal species who are kept in captivity.

In this article we will address the following questions:

It is common for bears in captivity to be rewarded with a juicy watermelon as a snack. Often these watermelons are frozen for the grizzly brown bear to keep them cool on warmer days. Watermelons are also used to teach the bears tricks or to show off their swimming skills. A zoo keeper will often throw a watermelon into the water so the bear jumps in and stays hydrated. A bear will often retrieve the melon using their teeth to carry it (imagine just how strong the bear’s teeth are to carry a watermelon that weighs a few kilos!).  A brown bear can easily bite into the watermelon with their teeth allowing them to get to the juicy, red flesh. A bear’s flat molars and sharp claws allow them to easily hold and chomp into fruit such as melons along with palm nuts, bamboo and fallen trees. Like us humans, some bears have more of a ‘sweet tooth’ than others. If other bears are in the same enclosure, they will ensure they are in a safe position to eat their watermelon. These animals are definitely not a species willing to share their snacks.

Watermelons are not only given to brown bears but polar bears love them too. A polar bears natural habitat is cool and snowy. When kept in captivity these cold treats are usually given regularly to cool them down.

Have you ever been envious of someone else eating your favourite snack? These five bears are making watermelons look delicious!

#1 – Nothing better than a slice… or two of watermelon on a hot Summers day. 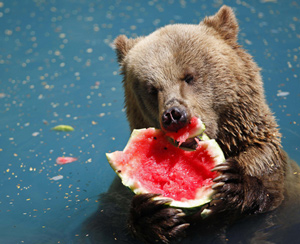 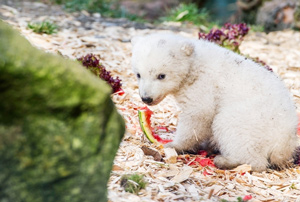 Treats for Animals Kept in Captivity

You may have visited a zoo and saw first hand a bear getting treated to a juicy watermelon. Bears are not the only ones that love this fruit though. Many animals kept in captivity are rewarded for tricks and good behavior with watermelon. Depending on the animals size, a slice, or two might be rewarded or if they are the size of a bear… they will need the entire fruit.

For Your Household Pet

You may now be wondering if your own household pet will enjoy a slice of juicy watermelon on a hot day? The answer is most household animals love watermelon. It is important you only offer the seedless flesh of the watermelon (or a seedless watermelon) to your pet though; as many pets can fall sick from seeds or rind. Watermelon has health benefits such vitamin A and potassium which can really benefit your animal’s well-being. Below is a list of pets that love a slice or two of watermelon:

There is nothing worse than tending to and watering a crop to wake up one morning to find all the fruit it has borne is gone. For those of us who live in areas renouned for watermelon loving wild animals, we can take steps in advance to stop them from stealing our precious fruit. For others, we may not even know a watermelon loving animal is lurking close by until our crop has been destroyed.

To stop ground animals such as coyotes, large fences are the best way to save your crop. For other animals bright lights and scare crows will deter them from going near the fruit. Where possible, protect your fruit by putting up netting from one end of the crop to the other. This way you will at least protect the fruit from birds and raccoons. Other watermelon growers have suggested creating individual wire cages that fit around each individual watermelon. No crop is ever 100% safe from animals. Growing watermelons and protecting them from animals takes perseverance. 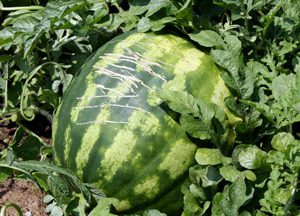 Determining What Ate Your Watermelon

If your crop has been destroyed you may wish to pinpoint which animal is the suspect to protect the crop in the future. Below you will find certain traits of watermelon loving animals. Along with the list of animals below, keep in mind squirrels, possums and wolves are also watermelon lovers.

Deer love juicy, ripe watermelons. Just when you are ready to pick your watermelons, deer will also be ready to eat them. Deer will pick at the melon to get the flesh from the center leaving much of the watermelon behind. They will often leave small, oval shaped footprints in the dirt. 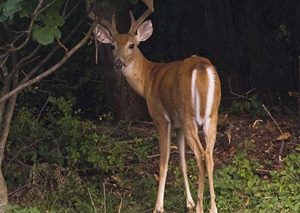 These animals will often hunt down crops at night. These animals will eat all of the watermelon’s flesh, leaving behind only the rind. The bite marks on the rind of a watermelon eaten by a coyote will be just over an inch in distance. If you notice paw like prints in the dirt, the culprit is most likely a coyote.

Everyone who grows a crop knows birds love anything and everything, especially if it’s sweet. Birds that are having trouble finding fresh water will poke holes in your watermelons in search of moisture to stay alive. Crows and pheasants are both watermelon loving bird species. 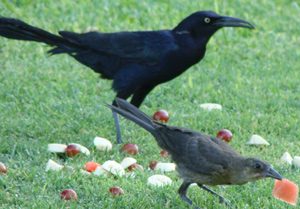 These animals will often make small holes in the fruit to get the flesh out. Raccoons have a sweet tooth loving all types of fruit. Raccoons often leave behind small footprints approximately 3 inches wide in the dirt surrounding the watermelons. Raccoons have been known to leave behind scratch marks on the outer area of watermelons they could not successfully get into. 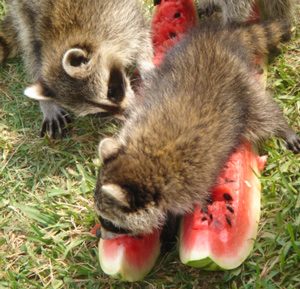 Want to know more about watermelon loving animals? Find out which animal loves watermelon the most here.