Six months ago, as has become my annual tradition, I made a New Year’s resolution to tackle something on my watermelon bucket list. This year’s goal: to compete in a watermelon-eating contest. The 26-week process of completing this resolution has been fun, to say the least – from choosing a contest to compete in, to interviewing a professional competitive eater, to practicing at home in preparation for the big day.

The watermelon-eating contest I took part in was an annual tradition at the Bel Air 4th of July Festival in Bel Air, Maryland (about 90 minutes from where I live).

We arrived at the festival (my wife, daughter and I) about an hour before the 11:30 a.m. eating contest, just in time to catch the end of “The Great Bel Air Frog Jumping Contest” in Shamrock Park. True to its name, it featured frogs jumping, and it was probably the highlight of the day for our three-year-old. (The contest winner was a frog named Honey Boo Boo Child with a three-jump total of 102 inches!) 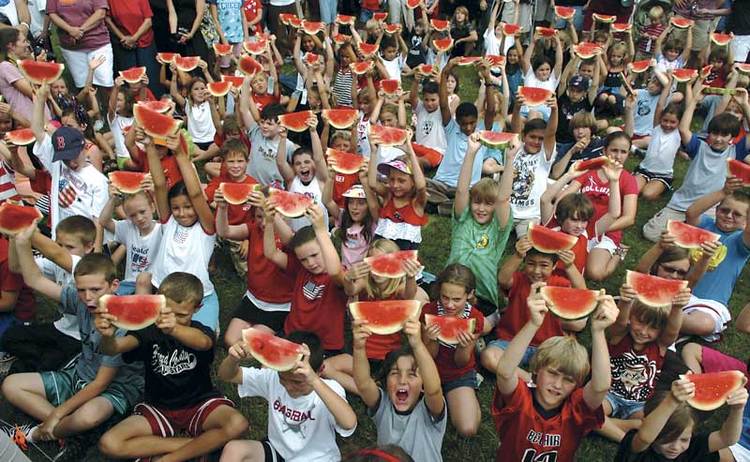 Alright, I’m not going to bore you with a recap of my stroll around Shamrock Park – let’s get right to the contest. Each competitor was given a nice-sized wedge of watermelon with simple instructions that the first person to finish (eat it down to the white rind and have an empty mouth) would be declared the winner. (Above is a photo of the 7-10 year old competitors proudly displaying their watermelon wedges before the contest.)

After a countdown from 10 – which seemed like it took three full minutes – the eating had begun. About 17-and-older contestants were clustered together and the 20 of us created quite the symphony of chomping and slurping sounds. And almost as quickly as it had begun, the contest was over.

A gentleman from Forest Hill, Maryland was declared the winner, and boy did he ever do a good job of eating that wedge right down to the rind. I’m not 100 percent sure where I finished – probably fourth or fifth – which isn’t too bad. I’m happy with that performance. I had a lot of fun preparing for the contest and you can be sure that I’ll be back again next year to take another shot at the watermelon-eating title!