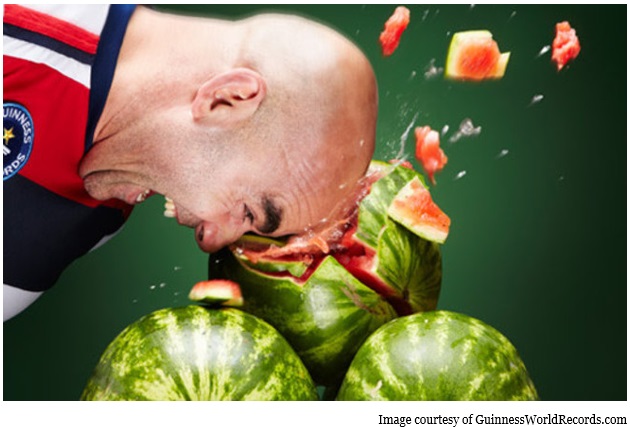 This year’s resolution is a lifelong dream of mine and promises to be, I hope, the most fun watermelon resolution I’ve attempted thus far. In 2016, I will attempt to set a Guinness World Record for something involving watermelon.

Which world record will I attempt? Good question. I’ll probably attempt several — maybe three or four over the course of the year — and chronicle the process here on the blog. That process will include announcements about which record I’ll attempt next, updates on my practice sessions and full recaps of my successful or unsuccessful official record-breaking attempt.

There are no shortage of existing watermelon-related world records on the Guinness website, either. There’s the “Heaviest Watermelon,” set by our friend, Chris Kent. I probably can’t cross that one off my attempt list, because we all know from my 2013 resolution that I’m a terrible watermelon farmer.

There are several records involving smashing watermelons with your fist, your head or even your thighs. For example, the most watermelons crushed with the head in one minute is 43. That record was set by a thick-skulled gentleman from Germany back in 2011. Maybe I’ll attempt one of those types of records; maybe I won’t.

Or maybe I’ll invent my own record (Guinness has an application process for new records). That certainly seems like the easiest way to enter the record books. After all, if the current record doesn’t exist, any attempt will become the new world record.

Regardless of which route I take to world record immortality, I can promise you it will be a very determined but very fun year filled with highs, lows and probably lots of bumps and bruises. Stay tuned next month for an announcement about my first world record attempt. In the meantime, if anyone has any ideas for new world records I should suggest to Guinness, leave a comment!

REMEMBER: All comments left on the blog this month are entered to win our January prize — the watermelon backpack — so comment as often as you’d like!

UP NEXT: SHRIMP AND WATERCRESS SALAD