You are here: Home / General / Cube Watermelon – One of the Most Expensive Fruits in the World 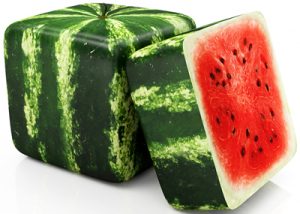 You may now be wondering why would anyone need a cube shaped watermelon? There is a number of reasons companies began growing these watermelons. For starters, many people have needed to downsize due to rising electricity costs and these square watermelons can easily be stacked beneath or above something else in a small refrigerator. In their country of origin, Japan, being space smart really is important. The shape of these watermelons also allows them to be easily stacked for transportation. Furthermore, these watermelons have been grown for their ornamental value. In Japan, many people display these unusual cube watermelons in their restaurants and homes to be observed by others.

In Japan, it is not uncommon for someone to give a watermelon as a gift. For those looking for something with a novelty purpose, these cube watermelons are perfect. Another reason cube watermelons were introduced was their ability to be sliced without rolling from side to side. We all know how difficult it can be to cut down a large whole watermelon. These watermelons can be easily sliced into the perfect squares to be enjoyed.

Cube watermelons were thought to be first invented in 1978 by Tomoyuki Ono, who was a graphics designer at the time. Tomoyuki presented her unique watermelons in a Tokyo gallery prior to patenting her idea in the United States. While it is suggest Tomoyuki invented these melons, others claim that they were introduced in 1980 in Kagawa.

It is not until recent times that these watermelons have grown in popularity. Although they originated in Japan, these watermelons are now popping up all around the world, in particular in large countries such as the United States.

How are Cube Watermelons Grown?

When I first heard that there was such thing as a cube shaped watermelon the first question that popped into my head was ‘How do they grow them?’. These cube watermelons are not left on the ground to grow into their natural shape. The vine is trained into large square boxes where the melon grows to maturity. The young watermelon is left in the box to naturally grow and take shape of the cube. The boxes these fruits are grown in are generally made of glass so that the sunlight can still reach them. The farmers allow these fruits to grow to approximately 19cm in diameter before removing them from their box and shipping them off to supermarkets to be sold to their new owners. The process of growing these melons is actually more straight forward than one may have first thought.

If you have a green thumb yourself, you may even be interested in growing your very own cube watermelon. Below we have listed some basic equipment and instructions for a ‘do-it-at-home’ cube watermelon crop. 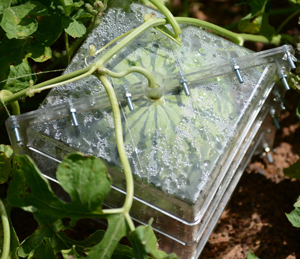 Growing Your Own Cube Watermelon

What You Will Need: 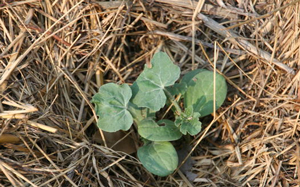 Cube watermelons were originally created so that those who were poorer and could only afford small refrigerators in Japan could still enjoy watermelon. While they were originally designed with good intent, these watermelons soon became a phenomenon worldwide. This cube watermelon craze led to a dramatic increase in price. In a Japanese supermarket you can purchase a unique cube watermelon for a pricey $125.00 USD. Often you can find them cheaper if you shop around, although due to the popularity of these prize fruits, generally they sit around the $100.00 USD mark. 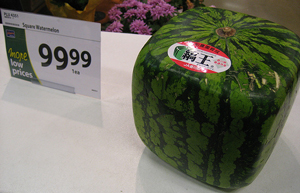