You are here: Home / General / NEW YEAR’S RESOLUTION UPDATE: A LOOK AT SOME WATERMELON EATING CHAMPIONS 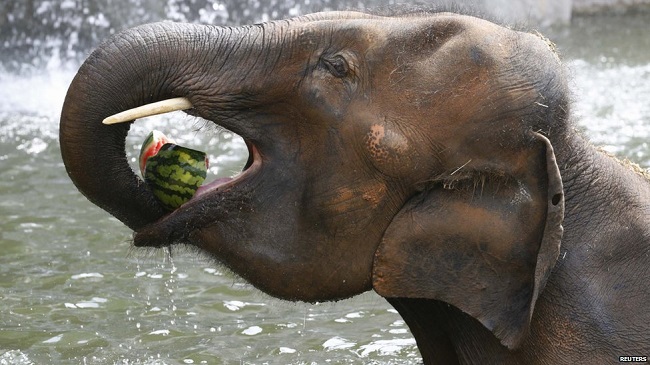 Compared to previous years, which included competing in a watermelon seed spitting contest and growing my own watermelon, my New Year’s resolution this year is pretty simple: Enter a watermelon eating contest. Essentially, my resolution is to eat a whole bunch of watermelon. How hard can it be, right?

Actually, the hard part isn’t eating the watermelon, but finding the contest to enter. Like the seed spitting contest in 2012, it’s not something that happens all that often up here in the northern states. I’ll write more about finding a contest in a future blog entry. For now, I’d like to focus on the fun part of this challenge – the eating.

As I’ve shared before, I am a former competitive eater. It’s been a few years since my last contest, but during a five or six year span, I competed in all sorts of contests, including chicken wings, ice cream, pizza, shoo fly pie, giant hamburgers, and even breakfast cereal. But I’ve never competed in a watermelon eating contest. To get an idea of what sort of goal to aim for, I took a look at some previous championship watermelon-eating performances:

1. “Buffalo” Jim Reeves – According to the International Federation of Competitive Eating, Reeves set the current watermelon record by eating 13.2 pounds of in 15 minutes on July 30, 2005 at the “Swellin’ with Melon Watermelon Eating Championship” in Brookville, OH. To be honest, I’d be happy if I could eat half that amount!

2. Elephants – Earlier this year, eight members of the Southwestern College (San Diego) football team faced off against two Asian elephants to see which side could eat more watermelons in a 15-minute period. The football players ate eight watermelons, but the elephants downed 10 to take the title.

4. “Furious” Pete Czerwinski – On May 30, 2010, Czerwinski ate an amazing 34 slices of watermelon in three minutes in a contest at the Mardi Gras Casino in Hallendale Beach, Florida.

As you can see, the bar is set pretty high when it comes to my future watermelon eating performance. Luckily, I only need to compete in a contest in order to accomplish my resolution – I don’t need to win the contest. That’s good news, because I really like watermelon and I might actually try to savor it during my future eating contest appearance!