You are here: Home / Recipes / TOUCHDOWN! 7 WATERMELON IDEAS FOR YOUR NEXT TAILGATING PARTY 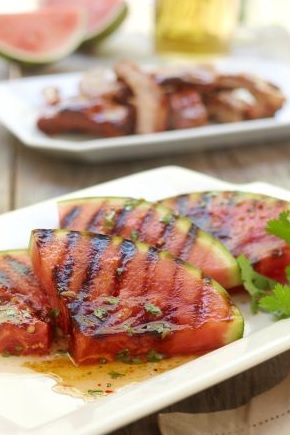 Summer is my favorite season, but fall isn’t so bad, either. I like the crisp, coolness in the air and all of the pumpkin-flavored goodies that make their annual appearance. As a football fan, I also like fall because it signals the start of tailgating season.

If you’re looking for some inspiration for your next tailgating party, you’d be wise to start with a visit to the “Recipes” section of the National Watermelon Promotion Board website.

Below are just a few ideas I found on the website to help take you next tailgating event to the next level.

A watermelon keg – Okay, this is more of a carving than a recipe, but you’ll find lots of ideas for beverages to put in the keg on the “Drinks” page of the website, too.

Watermelon BBQ Sauce – This sauce is easy to make, and it goes great on just about anything you might be grilling.

Watermelon Glazed Mini Barbeque Meatballs – If you love meatballs (and who doesn’t?), you’ll love these meatballs made with a watermelon barbeque sauce.

Chipotle Maple Citrus Watermelon Wings – Wings are a staple of any football party, and these will not only score you some points, they’ll probably be the game-winning touchdown.

Flash Grilled Watermelon Cheddar Burgers – This recipe is so simple, you have no excuse NOT to make it. Just grill up a slice of watermelon and slap it on top of a burger. That’s it!

Grilled Spicy Watermelon – As long as you’ve got the grill fired up, you might as well throw a few of these spicy watermelon wedges on there.

UP NEXT: The fastest way to cut watermelon cubes