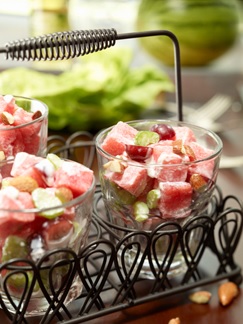 The Waldorf Salad, according to its Wikipedia page, is “a salad generally made of fresh apples, celery and walnuts, dressed in mayonnaise, and usually served on a bed of lettuce as an appetizer or a light meal.” It was created in the 1890s by a chef at the Waldorf Hotel in New York City (today, it’s better known as the Waldorf Astoria Hotel).

I don’t think I’ve ever had a Waldorf Salad, but the combination of fruit, vegetables and mayonnaise definitely sounds interesting. This version of the salad, which trades the apples for watermelon and the mayo for Greek yogurt, sounds even better. Oh, it also uses sliced almonds instead of the more traditional Waldorf walnuts.

If you want to switch back to the walnuts, go right ahead. And if you want to swap out the celery for something like, I don’t know, cubes of cheddar cheese, be my guest. In fact, that actually sounds like a great idea.

Stir together watermelon, celery and grapes in bowl. Just before serving, stir salt into yogurt for dressing. Add a sprinkle of water to dressing to reduce the thickness, if desired. Pour mixture over fruit and stir until coated. Sprinkle with almonds.

For more recipes using watermelon, check out the “Recipes” section of the National Watermelon Promotion Board website.

UP NEXT: My crazy Halloween idea